Coalition Against Landmines (CALM) and Child Survivors of War

In 2012, Dessu Sam, a trained physical therapist from Ethiopia who had been studying and living in the United States since 2001, traveled to South Sudan.  In the 1990s, Sam had worked at clinic in Addis Ababa, treating child landmine survivors, an experience that inspired him to work on awareness raising in Ethiopia and direct advocacy.  Through Sam’s efforts and the efforts of Landmine Survivors Network, the International Committee for the Red Cross’s Special Fund for Disability expanded its services in Ethiopia to include civilian victims of landmines and not just military victims.  In the United States, Sam re-connected with Shumye Gebrehiwot who had been the Director of Landmine Survivors Network in Ethiopia and had also emigrated.  Together, they founded the not-for-profit Coalition Against Landmines (CALM) to provide support to child landmine survivors in Ethiopia.  As a student at George Washington University, Sam often spoke of his work with CALM and the impact of landmines on Ethiopia.  Until one day, a fellow student, Makwei M. Deng from South Sudan, asked Sam, “Why don’t you do something about South Sudan?” That question led to Sam’s 2012 trip.

Sam quickly saw that the victim assistance need for landmine survivors in South Sudan was huge and the national capacity to respond to that need was minimal.  In Ethiopia, the infrastructure and rehabilitation services exist to provide assistance to survivors, along with transport mechanisms to make those services accessible.  In South Sudan, the world’s newest country, the services are lacking and reports and Sam’s own experience suggest that landmines continue to be laid in Unity and Jonglei states.

Working with volunteers from Juba University, Sam set out to create an entity that could provide some assistance to landmine survivors in South Sudan and provide mine risk education to prevent new injuries.  Even with a focus on host-country ownership and volunteer labor, Sam has found South Sudan an expensive country to operate in and because the country is so new, NGO registration laws are complicated.  However, after a “nightmare” process, Sam and a local Director, Robert Oketta, established Child Survivors of War (CSW) as a locally registered and operated NGO.  Office space, because there is so little of it, is very expensive, so to save money CSW shares space with other organizations.  CSW’s volunteers go to universities and public institutions throughout South Sudan to educate people about the risks of landmines and other explosive remnants of war and for child survivors who cannot access formal education, those volunteers also provide tutoring.

Tutoring in progress in Child Survivors of War’s Juba Office

Sam’s focus on child survivors is based on his belief that adult survivors are “conscious” of what has happened to them.  Adults possess the self-awareness and understanding to understand their injuries and actively participate in their own rehabilitation and recovery.  Children lack this awareness and may not fully comprehend their new reality.  Child survivors as they grow, frequently grow out of their prostheses and require a new one every year in order to be able to more fully participate in life.

The establishment of Child Survivors of War and political realities in Ethiopia have led to a re-thinking about the future of the Coalition Against Landmines.  With the support of CALM’s board of directors, CALM has become a fund-raising mechanism for CSW while continuing to provide direct support to two landmine survivors in Ethiopia, Genet and Tekle.  The new NGO registration laws in Ethiopia limit the amount of support an organization in Ethiopia can receive from international sources, like CALM, so CALM has not been able to expand its efforts there, however, CALM has made a commitment to Genet and Tekle and will continue to support them until they are adults and able to live independently.  Genet is currently in the 10th grade and has plans to attend a technical school to study business, after which she would be able to get a job and support herself.  A one-year program at the technical school costs US $1,000 and CALM is actively raising funds to cover the tuition and associated expenses.  Tekle is in the 6th grade and CALM expects to support his schooling for another six or seven years. 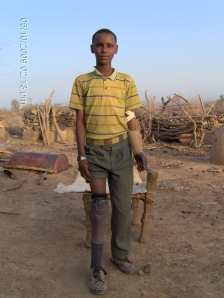 Tekle, a landmine survivor from Ethiopia 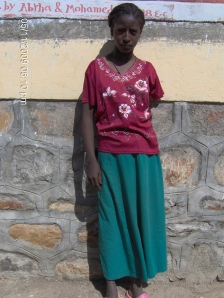 Genet, a landmine survivor from Ethiopia.

Sam and CALM’s board are contemplating changing CALM’s name to Child Survivors of War – International to formalize the relationship between the organizations in the United States and South Sudan.  Sam’s immediate plans are to travel to South Sudan and spend a year, developing the structure of CSW to build the capacity of the local director and take advantage of the energy and passion of the volunteers.  He wants to build CSW’s network to include local informants in the mine-affected states through churches and other formal and informal associations.  These expansion plans would likely require additional fund-raising, beyond the US $300 per month that is currently needed to support CSW’s activities in South Sudan, but Sam is confident that the opportunity is there.

More information about the Coalition Against Landmines is available on their website, www.calmint.org, and for more details about either CALM or Child Survivors of War, please contact Dessu Sam at dessusam@gmail.com.  In Juba, CSW can be contacted via the national Director, Robert Oketta, at cswssudan@gmail.com.