The Month in Mines, September 2016

“Every time I get close to making ends meet, someone moves the ends.”

This is the story of mine action.  We celebrated the 20th anniversary of Lloyd Axworthy’s call for a global treaty to ban anti-personnel landmines (CBC), but we also see the new use of mines in Nigeria and Libya, Yemen and Syria.  The vision of a mine-free world is still possible by 2025, but only if we can stop new use.

Two soldiers were killed and six more injured when their truck struck a landmine attributed to Boko Haram. At the time of the blast, the soldiers were returning to their base (All Africa). Another four soldiers were killed and 19 others wounded during an ambush that began when two Nigerian army vehicles hit a landmine (The News Nigeria). In and around the Nigerian army barracks at Bama, which had been captured by Boko Haram but has since been liberated, Nigerian soldiers cleare some 67 landmines and improvised explosive devices (All Africa).

Angola’s new Social Welfare minister, Manuel Gonçalves Muandumba, pledged to continue landmine clearance programs (All Africa). Since the civil war ended in 2002, 3.4 billion square meters of land has been cleared of mines, with almost half a million landmines destroyed.  In addition to mine clearance, thousands of Angolan landmine survivors have benefited from rehabilitation and prosthetic services and 15 million people have received mine risk education (All Africa). In central Bie Province, 350 hectares of land has been cleared so far this year (All Africa). In Malanje province, the Baroness Northover, the British Trade Envoy to Angola, visited UK-funded landmine clearance programs to observe the progress and see the investment opportunities created by demining (British Embassy Luanda).

Rwanda cleared the last of its known minefields several years ago, becoming one of the first countries in Africa to be able to declare itself as mine-free.  However, like other mine-affected countries, Rwanda continues to face contamination from other explosive remnants of war (ERW). In southern Rwanda, four boys were collecting scrap metal and one discovered an old hand grenade.  One of the boys played with the grenade, detonating it, killing himself and insuring the other three (All Africa).

In Darfur, two boys played with a piece of unexploded ordnance.  When the item exploded, one of the boys was killed and the other severely wounded (All Africa).

A Ugandan soldier serving with the AMISOM peacekeeping mission died after medical evacuation to Kenya.  The soldier had been riding in a convoy that struck a landmine near the town of Barawe.  Three other soldiers were also injured and evacuated (The Nation).  North of Kismayo, a bus struck a landmine in the road killing three civilians (Garowe Online). In Somalia’s capitol, Mogadishu, a landmine placed near the central livestock market detonated killing another three civilians and injuring many more (Garowe Online).

Worth showing a map of Libya here: 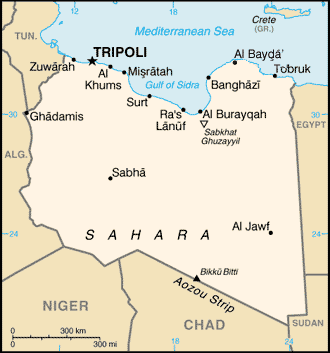 There are two ongoing battles in Libya at the moment.  In the east in the city of Benghazi (“Banghazi” in the map above) four soldiers allied with Khalifa Haftar’s army were killed and others injured by a landmine placed by Islamist forces (Libyan Express). West of Benghazi, about half of the way to Tripoli, Haftar’s forces are also fighting Islamists in the city of Sirte (“Surt” in the map above).  Haftar’s demining and engineering brigades are busy trying to clear landmines and explosive traps placed by the Islamists to slow his advance (AAWSAT).  Five soldiers were injured by a landmine and have received treatment (AAWSAT) and the US special envoy to Libya has warned the residents of Sirte not to try to return to their homes until Haftar’s demining teams have cleared the city (Libyan Express).