← Guest Post: Why does Angola report such a high level of landmine contamination?
The Month in Mines, February 2014 →

The following is unequivocal: there were no landmines in the United Nations trucks seized by the South Sudanese Army in Rumbek, in Lakes State on Friday, March 7th.  Guns and ammunition were found in the trucks and the Ghanaian peacekeepers and United Nations Mission in South Sudan have admitted the same, but landmines were not in the shipment.  The guns were being shipped overland against United Nations policy in vehicles whose shipping manifests reported as “food” or “general goods.” In response to the discovery, protests erupted in Juba and as far away as Melbourne, Australia.  The leaders of the protests have latched onto the accusations of the presence of landmines and have stoked passions against the United Nations.  Since violence broke out in December, thousands of people, including some believed to be loyal to ousted Vice President Riek Machar have sought sanctuary in the United Nations posts throughout the country.  The president of South Sudan, Salva Kiir, has accused the United Nations of running a “parallel government” in South Sudan and is using this arms seizure to discredit the UN (Voice of America; Deseret News; BBC News; Chimp Reports).

The UNMISS Force Commander, Major General Delali Johnson Sakyi, said that the items South Sudan sources have reported as landmines are canisters for gas masks to be used in “crowd control” situations, e.g., if peacekeepers need to use tear gas to disperse crowds such as those that have attacked UN posts.  (Talk of Sudan; Voice of America).  In an interview with Isaac Mugabi of Deutsche Welle, Ariane Quentier, the spokesperson for UNMISS said:

“I can only point you to the pictures that were produced by the government. If you look at these pictures and if you look at the objects that they call landmines – anyone who knows what a landmine looks like will immediately know that what is being displayed is not a landmine!”

Ms. Quentier is right, but not enough people know what landmines look like to be able to come to the correct decision.  So we will correct that now.  First, let’s look at the objects in question.  These are photos / screen shots of the items in question. 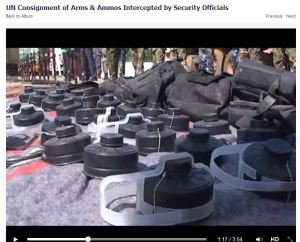 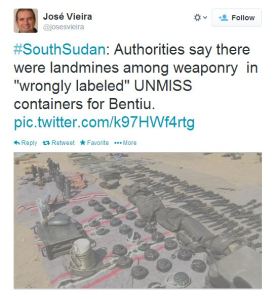 The Facebook screenshot is from video aired on South Sudan Television and you may go to the video and watch it yourself.

Now, let’s look at some landmines.  These images are all taken from the Collective Awareness to Unexploded Ordnance (CAT-UXO) website, www.CAT-UXO.com, and you may view all of these photos there.  The VS-50 and VM-1 anti-personnel landmines are similar in design (the VS-50 was made by Italy, the VM-1 by Iran) and I will grant you that they both bear a resemblance to the items in the photos above.  However, look at where the “ridges” are in the seized items.  They are on the top only and not along the sides as in the VS-50 or the VM-1.  The “knob” at the top of the seized items are also smaller, proportionately compared to the VS-50 and VM-1. 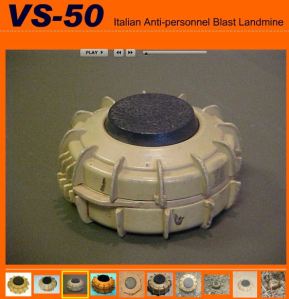 Italian-made VS-50 anti-personnel landmine, via http://www.CAT-UXO.com 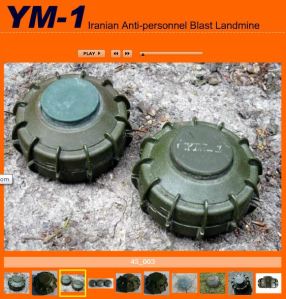 Looking at an anti-vehicle landmine, the Yugoslavian-made TMRP-6 has the “ridges” only on the top, but the ridges are much larger on the TMRP-6 than on the seized items and the seized items have a simple “knob” on top compared to the dual-tiered “knob” of the TMRP-6.

Yes, there are design similarities, but the seized items do not closely resemble landmines.  And please, do not just take my word for it.  Got to www.CAT-UXO.com and look at other landmine images.  You will see that the VS-50, VM-1 and TMRP-6 are the most likely matches to the seized items, but they are not exact by any means.

Now, please look at the following:

This is an Israeli-made canister for a gas mask filter and you may find it yourself on Amazon.com (please note the gift-wrapping option): http://www.amazon.com/Original-Gas-Mask-Nbc-Filter/dp/B005KMFPSA/ref=pd_sim_indust_5?ie=UTF8&refRID=02249T268RDSY2W6YNJR

Check out the “knob” and “ridges.”  They are exact matches to what was seized by South Sudan’s army in Rumbek.  The seized items even have the same plastic string connecting the “knob” on top to the rest of the unit; in the images from Rumbek, the string is white and on Amazon, it’s black but I would say they are the same.